September 4th, 2018
Before leaving last year, two of our seniors built prototype machines to give us an idea of the types of computers we wanted to include in our lab and give away to charitable organizations. For the last two class periods, several students in the A+ Build Class pulled apart the better of the two machines and identified each component along the way. Mr. Bianchi and I looked up the parts as we went as well, spec-ing out prices; because of varying factors, such as updated versions of a part and the ever-changing economy, we had the opportunity to talk with students about staying under budget. We discussed why the previous seniors made some of the choices they did, and now how we could maintain the same level of performance in our machines while also swapping out or modifying some of the components to fit our budget. It was a worthwhile exercise, and also led to discussions as involved as the rising prices of Graphics Cards due to their use in the Bitcoin industry. We ended with a list of parts and alternate parts that will give us a machine that is (hopefully) under budget, and the next step will be ordering these to build our first round of machines as a whole class.

October 1st, 2018
After spec’ing out the parts from one of our preliminary machines, students spent a week or so working on their A+ certification modules online while we waited for parts to arrive. Once all ordered parts came in, it was time to test to see if they would fit together and work like the previous machines we assembled. The students, Kirk and Nathan, have some experience building these types of machines, so we tasked them with assembling this test machine while explaining to others what they were doing. They hit a couple snags along the way — trying to figure out how some of the parts fit with the particular motherboard/case combination — but overall it was a successful demonstration of assembling a machine.

Today was the start of our first round of building machines in the A+ Certification/Computer Build class. Previously, we ordered enough parts to build 12 more machines, but each team of students will focus on a machine at a time. We began with all 4 of the teams gathering their parts from the pile in the back of the library, opening the packaging, and taking inventory of each package. Mr. Bianchi also took some time to explain the timeline of the first round of building, grading for this round, and his expectations of their procedures throughout each day. Lastly, when students had taken stock of all their parts, they began by installing the I/O shields into the cases.

Today we began as a whole class reviewing what we started yesterday. Mr. Bianchi reminded students that it’s well and good to help each other out as we run into problems with the builds, and that we are all in this together to successfully assemble the machines. After this, we got to work for the day!

Student teams have independently determined the order of their build process while still sticking to a larger, more general installation order. A couple learning experiences that we encountered today were: 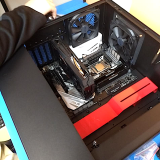 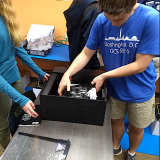 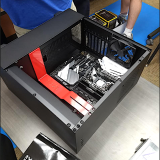 Today we began with a round table meeting of what we hoped to accomplish for the day for the first builds to be complete. All teams still needed to install the power supply, cooling system, and SSD drive to their machines. The only real issues we ran into today were figuring out a way to fit the radiator system to the mount provided for it. With a little bit of troubleshooting and flipping parts around, students were able to find a good fit. Team status for the end of the day was as follows:

Today was a fairly straightforward assembly day. The only issue we ran into was with Team 2, who encountered a setback in mounting their heatsink — there was too much play with the mounting screw, so things did not sit properly on the motherboard. Progress is as follows:

Today all teams wanted to push as far as they could towards finishing their first machines. This meant for many of them, fixing the orientation of some of their parts, installing final pieces, and getting everything wired up. While many made progress, this build will still continue on into next week.

An interesting occurrence is that our students who assembled the spec machines keep running into instances in which they have reference the previous case, but pre-suppose a solution to the build, which makes them second guess themselves. For example, in Team 3 today a student was having difficulty hooking up the cooling fans correctly. In the spec build, there was wiring hooking them to the machine; however, because these black and red cases do not have the same wires and connections, he thought that we were missing pieces, and on the verge of a major problem. After looking closely, however, we discovered there are ports for the fan connections on the motherboard, and they hooked into there just fine — crisis averted.

Team 2 resolved their issue with the risers today. We discovered that the company shipped several different sized risers to use in different types of machines, and they had installed the incorrect risers. Consequently, they spent some time taking parts out and re-assembling with the correct risers. Progress for the day is as follows:

Today teams wanted to push ahead towards completion. Being in the final stretch, many of them only had to finish wiring and connecting the power supply before they could test their machine. A couple groups had some issues with poor cable management, and figuring out the order for hooking the power supply wires to the machine. It was very much a process of trial and error! At the end of today, the progress of each team was as follows:

Team 1 (Brendan, Brett, Stefan): everything hooked in, didn’t turn on at first; troubleshot the problem, and by the end of class had been able to power up their machine
Team 2 (Nathan, Michelle): continuing to hook up the power supply
Team 3 (Kirk, Olivier): Powered on, in the process of installing the operating system

Today progress and work was as follows:

Team 1 (Brendan, Brett, Stefan): Had to rewire their machine to make it cleaner, but ran into problems booting it up. Fans were not operating correctly and the BIOS would not start — after troubleshooting and working on the problem, they discovered that the RAM was not seated correctly. This got the BIOS up and running. Next, they worked with the fans, and figured out that those were not plugged in tightly enough. This fixed the problems! After that, they need to install the OS.
Team 2 (Michelle, Nathan): Today Team 2 continued their work wiring up their machine.
Team 3 (Kirk, Olivier): Team 3 finished loading the BIOS today, and they are our first completed machine as an entire-class build.

Today was wrap-up day for the build. Teams 1 and 3 were already finished and had the OS loaded. Team 2 finished up their wiring, booted their machine, and installed the OS within the first 15 minutes of class. For the last half hour, teams broke up and separately planned out a sequence for parts installation to optimize the build of these machines. Tomorrow we will come together as a whole class, discuss each list, and determine a finalized build order for the next round of assembly.

Today we met to review, discuss, and determine the final installation sequence to create the most painless build process. We came together and looked at 3 separate drafts of proposed building sequences, all generated individually by each team yesterday. We compiled these instructions into a final document to be our “gold standard”, which will become our formal instructions for the next set of computer builds we do. Tomorrow, students begin their next section of the A+ Certification training online. Our Finalized Computer Build Process is as follows:

This week the A+ Certification and PC Build have hit the section of the course in which they build their second round of machines. Up to this point, they have now completed virtually all of the A+ Certification training online, and are wrapping up the coursework for that. Their focus has shifted into build mode, and the teams are rocketing through these machines! We will have a computer lab, along with PCs to donate, in the next week. They’re doing great!

During our Technology Expo, these students were involved with displaying their knowledge of computer construction for our visitors. There were a couple different stations at their table; for one station, students ran a matching game where visitors could try to pair a computer part with the task it was designed to perform. In the other station, visitors could help our students build a computer. Throughout the entire Expo, we had students building a computer in real-time. Visitors had a blast helping assemble one, and our students in this class represented themselves very well during this event.

Now that the Technology Expo has wrapped up, our class has set out to donate a number of machines to local charities. We have made contact with, and are distributing machines to: North Carolina Men’s Baptist Organization in Warsaw, Thrift 2 Gift, and the Salvation Army.