On April 8th we held our first ever GRACE Technology Expo from 6 pm to 8 pm in the evening. We had several events planned for the evening. First, we invited several industry leaders in the Triangle area in to have a panel discussion led by our Head of School, Eric Bradley. The guests attending were Peter Knepley, Lead Programmer at EPIC Games, Amanda Pouget, a software developer from Role Model Software, and David Katz the World Wide Lab Coordinator at Cisco. All three were able to speak about their experiences in the technology field, and offer great advice to students and families about the industry.

After the panel discussion, everyone was released to go downstairs to our student activity stations. All of our computer science and STEM classes had a hand in setting up tables to present and showcase what projects they have been working on throughout the year. The tables and events were as follows:
1.) Remote controlled cars that run on Python in Mr. Bianchi’s room. Guests were invited to race the cars against one another.
2.) Raspberry Pi LED and sensor projects presented by the Intro to Computer Science class. These students gave demonstrations on how a Raspberry Pi and circuits work, and also explained the various sensors they built, including a temperature sensor, water sensor, and humidity sensor.
3.) Roving robots, which our Intro to Computer Science Advanced students assembled and ran. These robots were programmed to collect different objects from a playing mat and dispose of them in a receptacle.
4.) A Drone Cage where guests were given a brief tutorial on how our drones work, how to fly a drone, and then were challenged to make a drone lift off from a platform, fly through the air, and touch down on another platform.
5.) Computer building stations were our A+ Certification students built a computer for guests to see, and also explained the components and functions of what they were putting together.
6.) STEM student tables that used a Makey Makey to create a banana piano, along with play doh tetris controls.
7.) Several rooms were also meeting points where our visitors could interact and talk with our three special guests from the panel discussion above.

Lastly, at the end of the evening we raffled off one of the student-built computers to the attending guests.

This was a great evening that had a turnout of an estimated 150 people, both from GRACE families as well as from visitors not part of our community. We partnered and advertised with the NC Science Festival to invite and draw in more individuals, and had a very successful evening.

Mrs. Dunning’s 7th grade STEM class completed a Cardboard Arcade project this year, and invited other GRACE students and parents to come participate on January 24th, 2019. The students learned about designing, building, and engineering in order to create these games, and all attendees had a spectacular time at the event.

Throughout the year GRACE has made an effort to connect with and bring in professionals that deal with many different aspects of the technology field. Through these visits, we hope that students are inspired, encouraged, and guided to their various interests in the technology industry, and given new avenues to explore and think about for their futures.

September 5th, STEM class visit
On September 5th, Mr. Bentley Olive visited our 7th grade STEM elective. Mr. Olive is a patent attorney in Apex, NC, and his field is directly related to interacting with engineering, technology, and inventors. He discussed his background and love for technology, and how in college he became interested in law as well; patent attorneys get to work with both new technologies and law, so it was a perfect fit for him. We talked about how his job has a good amount of variety each day, and how much fun it can be to meet excited inventors and then advocate to get their idea or invention registered with a patent. He also gave us examples of real patents, and patents that he helped file. We were very honored to have Mr. Olive take some time to speak with us, tell us about his career, and show us examples of what you can do at the intersection of technology and patent law. 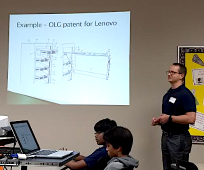 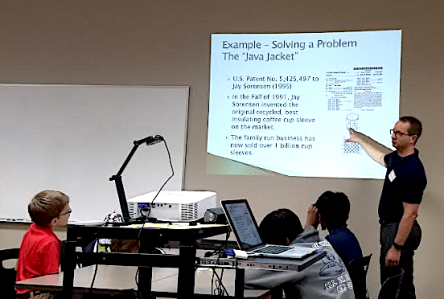 September 7th, STEM class visit
On September 7th our STEM elective class had a visit from Mr. Dave Katz, who is an engineer and scientist at Cisco. He is our main point of contact with that company, and last year allowed GRACE computer science to tour their facilities here in the triangle. Mr. Katz was a network engineer for 17 years until he got into management, which he has been doing for 18 years. He says that he is a scientist by hobby, and an engineer by trade, and also spoke with us about Creationism and how the world had to be designed, and how being a scientist led him to his belief in God. Speaking of Cisco, he explained how they set up gigantic labs to be identical to conditions in which their customer is experiencing a problem, and then have their engineers troubleshoot from there. He says his job is fun, exciting, challenging, interesting, exhausting, hard. Gets to work with amazing people, build glorious things, work on something BIG, profitable to support his family, and able to serve and help other people. He also was very inspirational, telling students that they too can be great scientists, engineers, and Christians. 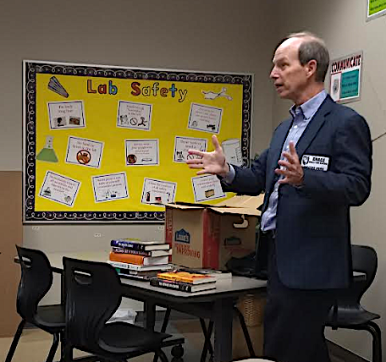 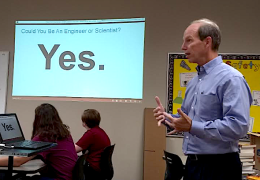 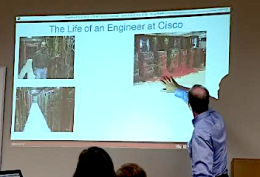 November 26th, 2018 – Computer Science AP classes
Today we were visited by Amanda Pouget from Role Model Software, a consulting company based in Fuquay-Varina, NC. Amanda began by giving us a bit of her background and what led her to software development, and then quickly dove into many aspects of her job and deciding on a career in the technology field. She discussed client/server interactions, latency and what causes and helps make it better; she also touched on how Chrome caches websites to retrieve for later, and how web apps like Netflix differ because they run everything inside of the app instead of visiting a server with each click. She told a bit about the history of web development, and also gave a good review of different programming languages and how they are used. One particularly interesting aspect of her talk with the technology lifecycle, and how a language will be hyped, peak, decline, and then be adopted into a second, longer cycle of peaking and then eventually declining. Amanda also talked about different careers in software, hardware, and IT, and how each section of technology has a different fit for your lifestyle and personality, and how employers look for specifics depending on which of these jobs you are looking for. After this, she went in depth with web development to talk about its benefits (such as it being a high demand, fast growing, and best paid version of software development), the worst/best paradox of working for large companies, and how you need to take everything into consideration when you are looking for a career (location, pay, work environment, etc.). She also showed us examples of what projects she has worked on in the past, and showed how relatively simple lines of code can create rotating objects on a web platform. 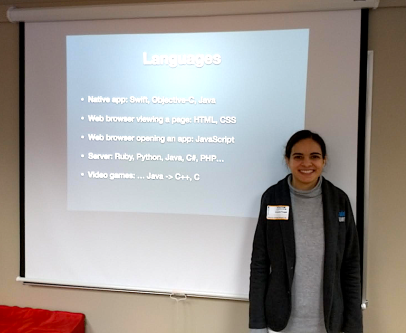 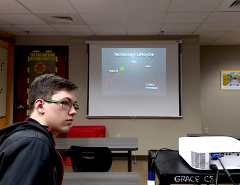 January 7th, 2019 – STEM class
Today the STEM classes were visited by Dr. Byron Wingerd. Byron is a JMP Systems Engineer for SAS. During his visit, he discussed his education and career path from Biochemistry to his current job at SAS. He spent time discussing how each job taught him different skills that helped him along the way.

January 10th, 2019 – STEM class
Today the STEM classes were visited by Brian Garrett, who is the Manager of Global Technology Practice at SAS.  He came to talk about creating arcade games. He, along with 2 of his friends, built 3 arcade games and a control board. He brought parts from inside the games and explained to the students how they work. This kicked off our Cardboard Arcade unit. 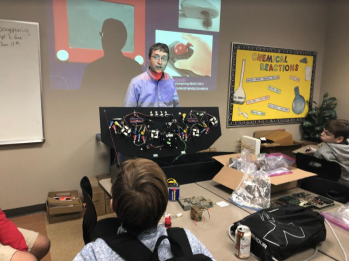 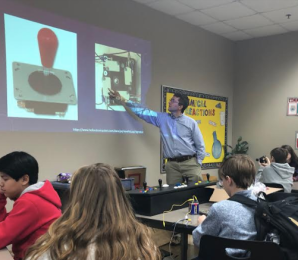 Mac gave us a history of her time at Chapel Hill, and what computer science classes in a college environment is like. She talked about the IDEs they use, projects she has worked on, and how the classes are graded (upper level classes are graded on style and if another human can read and interpret your code, as opposed to just having the code working).  She told students that even though some projects or classes can be frustrating, you need to just dig your heels in and get it to work — once it’s working, you can fix it up from there. Mac talked about some of the past projects she has worked on, for both classwork and for internships — for example, one project was working with pixels in an Instagram-filter style application; another project was working with AIG flight insurance to generate insurance purchase options.

Mac also stressed how important it is to be a good communicator, and how taking the initiative can help you succeed. Good communication is essential, because even if you are an awesome coder, people need to be able to understand you, relate to you, and know what you are talking about. To this end, she placed a great emphasis on starting with good habits from the outset, like commenting with detail on the code you write, and on naming variable something people can understand. Communication also includes interpersonal skills, so she told stories about how she goes out of her way to talk with her professors, to ask presenters questions that go beyond the low-hanging-fruit, sending thank you notes, and how she continues emailing with people even after they have visited. 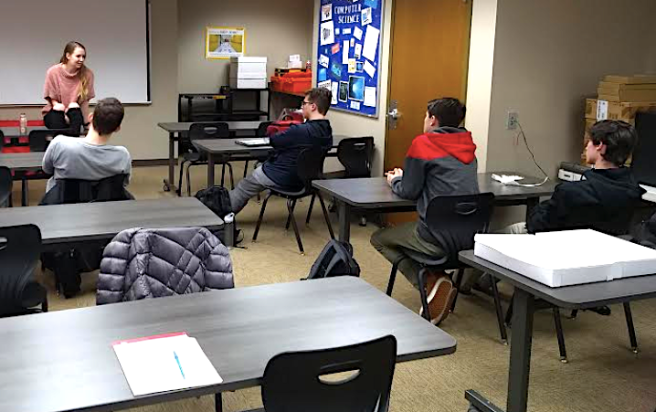